Shlomi Ben Haim, Co-Founder & CEO The way software is developed and distributed has changed dramatically because of the cloud—software updates are now pushed out automatically, mostly without our noticing—and that creates the need for new software distribution pipes.

If development to release lifecycle takes few weeks, if your Dev and Ops teams still use different methodologies and you are lost in the Continuous Integration, Deploy and Delivery Ocean then you would find one name standing out, JFrog, the company that's revolutionizing the way development software packages is built and distributed. Based in Israel and California, and founded by long-time field experts, JFrog has created Artifactory and Bintray, providing the software industry with the first binary repository solution and Bintraythe software Distribution as a Service platform.

JFrog positions itself between developers and DevOps. It is completely changing the way these groups store and manage binary code to provide complete control over the entire software release process.
By mitigating the most difficult challenges in managing software artifacts, JFrog is at the hub of where development and IT operations meet.

Push Software Very Fast and It Needs To Be Automated

Through its flagship product Artifactory, JFrog has changed the way developers and DevOps team store and manage binary code, allowing for complete control over the full software release flow. As the use of components in software development continues to grow, developers face new and varied challenges. Artifactory functions as a single access point organizing all binary resources removing much of the overhead connected to the complexity of developing with open source libraries and other 3rd party components. JFrog continues to set the software industry standard with Bintray, today's leading software distribution platform which offers a developer centric, social platform for storage and distribution of software libraries. JFrog's end-to-end solution—from Development to Distribution—is a vital part of a faster, more efficient application development and release processes that leads today's Continuous Integration and Deployment space.

Thanks to Artifactory and Bintray’s seamless integration with CI ecosystems, JFrog offers a revolutionary solution that has become the uncompromising standard among Fortune 500 companies.
JFrog’s state-of-the-art products position the company as a pioneering industry leader in managing the software development cycle. Before the cloud, development and distribution were disconnected, but with JFrog, what used to take customers like EMC Corp. and Oracle Corp. two months can now be done in less than two days.

Due to all these efforts JFrog has more than one million users worldwide and several brand-name customers like LinkedIn, Netflix, Twitter, Oracle, EMC2, Apple and VMware on its platform. It has also raised $7 million in fund raising series B round led by VMware and included Gemini VC. “From our past experience we didn’t want to go to VCs before we had a mature product and partners and customers,” said Chief Executive Shlomi Ben Haim, who added that he turned away funding offers from several Silicon Valley venture firms. “You don’t build a business plan according to what you raise, but what you sell.”

JFrog’s mission has always been to provide the best technologies and tools for daily use that will maximize the effectiveness of the software development and distribution cycle. Made by developers for developers, JFrog’s core values are based on non-compromising professional standards, superior quality code, first-class service, strong customer relationships, mutual trust and integrity and it plans to follow the same strategy to continue to be the market leader.

Description
A provider of effective technologies and tools for the software industry, Jfrog has created Artifactory and Bintray for the software sector, enabling the first binary repository solutions and a social software distribution platform. 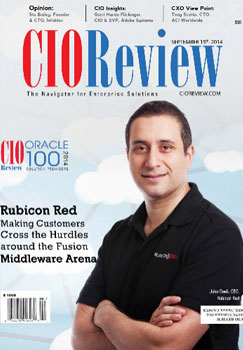